Meaningful time online and the pros and cons of digital society

In Sweden in 2019, access to fiber is increasing, as many as 98 percent of households have access to the internet, and 95 percent of the population state that they use the internet. But how meaningful is all the time we spend online?

When we asked questions for the first time about meaningfulness, we saw large differences for different activities regarding how the time we spend is experienced. Only a quarter of people think their time on social media is meaningful. This can be compared to the use of news apps, in which nearly 60 percent of users consider their time to be well-spent. The corresponding figure for mobile games is only 12 percent.

Digital exclusion is diminishing but is still significant in our society. This becomes particularly clear in this year's report when we put the spotlight on public digital services, such as e-services in health care, public transport and the Swedish Tax Agency, which are available to all citizens.

The majority state that these e-services make it easier for them and that Mobile BankID has been a great enabler in this area, while at the same time, some say that e-services are making life more difficult. We are also taking a closer look at the growing concern that public authorities in Sweden - and large companies such as Google and Facebook - will infringe on our personal privacy online. Nearly half of all Swedes feel monitored on the internet. We have become more restrictive when it comes to sharing other people's posts on social media and overall, the use of social media seems to have begun to level off.

24%
feel that the time spent on social media is meaningful.

While the benefit of society's digital transformation is digital inclusion, the negative side is the exclusion it can lead to. In the wake of last year's report, which highlighted the gaps on the net, we are following up on digital exclusion from several different angles in this year's edition. We find out to what extent we feel part of the digital society - something that most people generally do. Similarly, we report the exclusion that emerges in the use of digital community services where age, low income, and low education become clear risk factors.

Furthermore, we report the total number of those who never go online, and those who rarely do so. All in all, there are about a million Swedes living in digital exclusion. This is a slight decrease from last year. It is worth noting is the population that is getting older and therefore more internet users are included in the older age groups for each year. Thus, increased digital activity should not be interpreted as a major behavioral change in the elderly.

For the digital community services, we have chosen to take a closer look at ten services where the Swedish Tax Agency's e-services rank in the top of the number of users. They are followed by public transport, and in third place, health care digital services. Significantly more people use health care e-services to book a physical doctor's visit, than any of the new apps that can replace doctor's visits.

Half of people today use a digital mailbox, which is likely an effect of the Swedish Tax Agency offering a faster payment of tax refunds to those who have a digital mailbox. Digital services for pensions are not even used by half of the population. This is the only e-service in our study where the elderly are more active than the younger people.

Thanks to digitalization, the public administration currently has great opportunities to create efficiency gains and thus save money for taxpayers, to create large environmental benefits in the form of reduced paper consumption and to provide increased service to citizens through increased accessibility, faster processes, et cetera.

However, some groups run the risk of being left outside. It is important that authorities in Sweden take into account that those who are not so digital may need alternative ways of contact. At the same time, training efforts and assistance are needed for those who want to use digital solutions but have not yet started. To minimize the risk of exclusion and to promote inclusion - for all citizens.

After the increase in fiber-connected households slowed down in 2018, development has now regained momentum. More than half of households now have access to fiber and the largest increase is in rural areas. As many as 98 percent have access to the internet in their households and 95 percent also use the internet. Here the elderly are starting to catch up with the rest of the population. Who is using iPhone and Android respectively? We find that out, as well as how many have smart speakers and electronic locks in their homes.

How meaningful and well-spent do we consider the time we spend on different apps and e-services? For the first time, we ask the users of a number of selected activities whether they think their time spent on these is meaningful or not. News apps are at the top and mobile games are in the bottom spot. Social media falls far down the list. 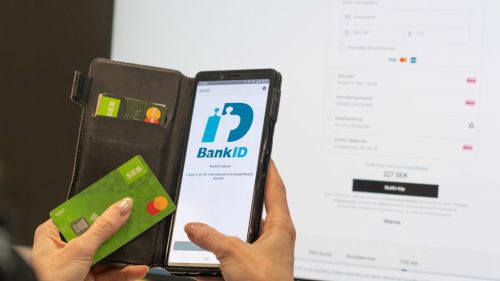 Mobile BankID and Swish are increasing

Mobile BankID and Swish continue to grow. Mainly, there is an increase among the elderly as more and more internet users reach higher ages. Men are slightly more likely to sell something online than women. They also consider e-commerce apps and second-hand sites somewhat more meaningful than women, but it is mainly parents with children living at home who see them as time well spent. Parents say they are more likely to be subjected to misleading purchases and card fraud.

Almost half are concerned that large companies such as Google and Facebook are infringing on their personal privacy on the internet. Only one fifth are concerned by the Swedish authorities infringing. Concerns have increased in both of these areas in a five-year perspective. Hate speech on the internet especially affects younger people, but has not increased in recent years. The number of abusive e-mails has, however. The internet is becoming increasingly important in the private sphere as well as in work and studies. The feeling of being part of the digital society is found in the majority of the population.

Compared to the previous year, the sharing of others' content in social media has decreased. In particular, this applies to those over 55 years. Less than half trust the majority of information on the internet. More young people than older people have received training in source criticism, while older people are generally more trusting. Is the new GDPR data legislation ineffective? Most internet users say that they have accepted terms of use on a site without reading through them.

E-mail dominates - but will chat take over?

Practically everyone uses email. Daily e-mailing is lower among younger people than older. Younger people instead choose to chat, which continues to grow. Video calls and telephone calls over the internet are also increasing slightly.

The number of social media users is beginning to level out

The majority of internet users use social media. From 2010, there has been a constant increase in usage every year, but this year it has slowed down. Instagram and Snapchat, which earlier have grown constantly, more or less remain at the same levels as last year. Facebook's growth seems to have stopped and we may even spot a downward trend. Only a quarter of social media users believe that the time they spend on the various social networks is meaningful.

More podcasts and digital books in our hands

Podcasting has grown every year, and since 2015 total podcast listening has doubled to reach 55 percent today. Similarly, the consumption of digital books is steadily increasing. Today, 42 percent of internet users consume digital books, where the audio book has a small lead over the e-book. However, the paper book retains its strong, stable position over the years and is still read more than twice as much as the digital versions.

Digital movie viewing and music listening are increasing. Similarly, the proportion of people who pay for digital subscriptions to film and music services is increasing. The youngest people are the most likely to pay. The increase is greatest with streaming services for film, television and videos (57%), which are now basically at the same level as music (58%). In comparison, digital newspaper subscribers (32%) are at a relatively low level.

Playing entertainment games (60%), playing for money (8%) or watching other people who play games on the internet (19%) are mainly activities that young men engage in. Older women are also more active in playing entertainment games. Regardless of gender or age, the mobile phone is our first choice for gaming, although men more often choose the computer and older people play on the tablet more often than others. In general, neither mobile games nor computer games are seen as time well spent by its users.

Some key figures for The Swedes and the Internet in 2019

Facts about the survey and The Swedish Internet Foundation

The Swedish Internet Foundation is an independent, business-driven and non-profit organization. We work for an internet that contributes positively to people and society. We are responsible for the internet's Swedish top-level domain .se and handle the operation and administration of the top-level domain .nu. The revenues from the business operations finance a number of initiatives aimed at enabling people to make the best use of the internet, and stimulate knowledge sharing and innovation with an internet focus.

With this survey, The Swedes and the Internet 2019, we want to contribute facts and insights on how the use of the internet in Sweden is developing. We want to provide the conditions for the digitalization of Swedish society and the business community to take place on an informed basis.